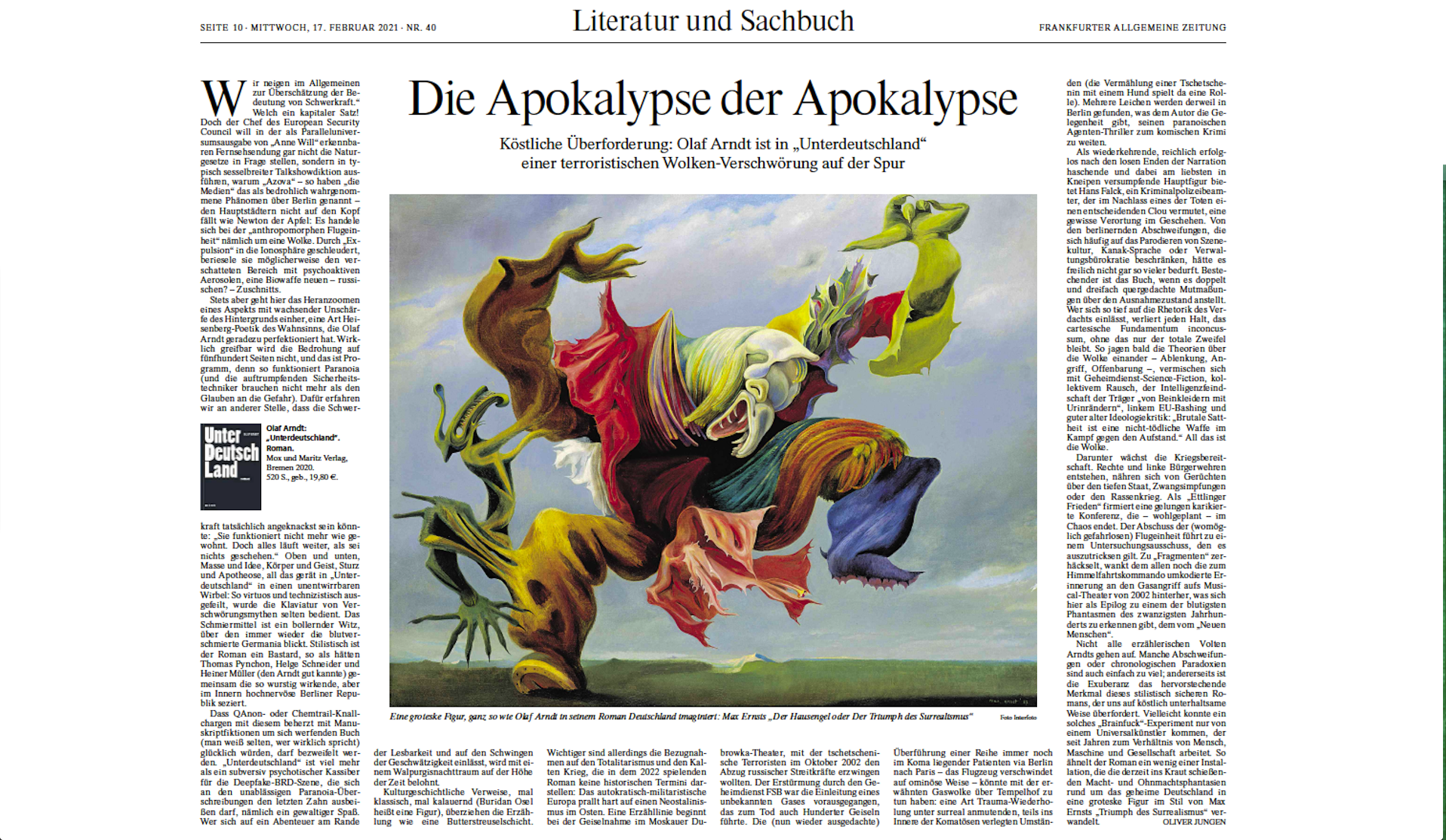 May 19, 2022 An airplane disappears over Berlin. A terrorist attack? No wreckage can be found. But the next morning, a strange cloud hangs over Tempelhof. Experts analyze the aerosols around the foamy structure: everything is enriched with the novel AZOVA3 virus.

Three corpses in the Volkspark and an overbred alpha pooch pose a mystery. A case for Hans Falck, inspector at CivEx, the private successor organization to the C.I.D.. Falck searches a basement in Hasenheide 92 and ends up in Unterdeutschland (Subterraneangermany). A trip through the deep state begins.

„Falck sums up. What we know is almost nothing. None of the bits fit together. Falck spits out. He lights the next F6 on the stub of the last one. Ostkraut.“

„A wild ride through science fiction, dystopia and politics …. I laughed out loud a lot while reading it.“ Margaux de Weck

„i consider the book to be a well-composed sociocritical bestseller, though i must admit that i have no clue what a book makes a bestseller.“ Bert Papenfuß-Gorek

„I would have to lie if I should say that I understood everything.“ Andreas Rötzer

The novel „Unterdeutschland“ is, according to Oliver Jungen in the Frankfurter Allgemeine Zeitung of February 17, 2021,

„an infinite jest … a kind of Heisenberg poetics of madness that Olaf Arndt has just perfected. … Stylistically a bastard, as if Thomas Pynchon, Helge Schneider and Heiner Müller had together dissected the Berlin Republic, which is in a state highest nervousity. … The ivories of conspiracy myths have rarely been tickled with such virtuosity and technical sophistication. … Exuberance (is) the most salient feature of this novel written with an immaculate sense of style, which overpowers us in deliciously entertaining ways.“

In the Neue Rheinische Zeitung of March 25, 2021, Prof. Dr. Rudolph Bauer contextualises the novel between Döblin and Orwell and sums up: „On his way through the deep state, Falck comes to many stations reminiscent of Dante’s Inferno in the Divine Comedy. He encounters a document destruction center and the hackers of an ominous organization. Together with other protagonists, he gets caught in the gears of powerful economic and political interests. In the end, he discovers that he has been put on the wrong track by the secret service. … It is impossible to talk about all this with others after work in his regular Kreuzberg pub. Falck encounters the incomprehension of those who, in their everyday bias, are unable to recognize how the world around them has changed, how they themselves and their lifestyle are disconnected from the actual relations of domination. The latter are authoritarian, but ordinary people and pub-goers fancy themselves in the normality of a democracy.“

Kai Köhler states in Junge Welt on July 31st 2021: „The exuberant, uncontrollable is an integral part of this novel. readers meet mixtures of animals and humans, humans and machines. They all deal with techniques of domination as well as with something intangible, anarchic, which always eludes control. This relationship is a strength, insofar as the book understands the imminent means of state domination as both securing domination and generating new contradictions. Arndt’s confident literary play with these contradictions suggests a position of strength.“